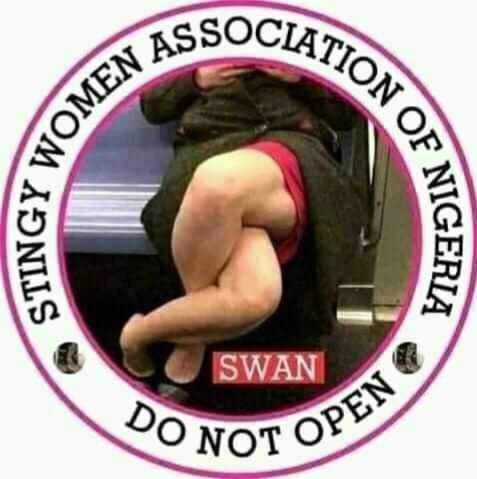 I have been greatly entertained by the comments I read from supposed members of the Stingy Men Association of Nigeria (SMAN) in the last few weeks.

I was undeniably amused by the level of dedication this club members portrayed in dealing with their affairs and showcasing what manner of “aka gum tight” they are made of.

I was even contemplating joining them so that I could craft serious but yet playful response to the unending complaints of members who call out for help when they seem to be in trouble with the opposite sex. Of course, this trouble had to do with money. Stingy Men Association of Nigeria no dey give “shi shi” so don’t expect a kobo from them.

I thought my sex would be a problem since I’m a woman but then SWAN came up and I thought, again, I could just check it out. Behold and Lo, I couldn’t can the slogan. What the actual whatever! Meanwhile, you guessed right as SWAN is Stingy Women Association of Nigeria.

This is what Ifiok Bernard, popularly known as ‘Ifioque’ on Facebook had to say about everything SWAN and their unbelievable slogan.👇🏽 I use the darker emoji anyway because I’m brown skin.

“Girls (and women) needed a campaign that rivaled the “I’ll see what I can do” campaign
by the fictional ‘Stingy Men’s Association of Nigeria’ who had unanimously decided to spend less on them, so the sister rival League #swan came up with “We will not open.”

This theme is to validate that men who aren’t spending money on them wouldn’t get sex.

This is very amusing because from time immemorial, women had proclaimed that they had more intrinsic value in a relationship than offering sex, that they were not to be bought with money, and we were almost believing them.

But at the brink of our admission of the fact that ‘truly,’ women might be of more value to men than sexual gratification, they come up with “WE WILL NOT OPEN.”

This is solid confirmation by the female coven, that truly, after years of argument, refutation and even outright gender wars, men were right about the fact that women predominantly give sex for finance and would withhold sex if they aren’t getting money.

We could have arrived at this conclusion a lot earlier and gotten it over with.

Well, men, now you’ve heard it.
Go make money. That is the only validation you need and you’ll have the women you want in your life.

They said so themselves.”

I had to quote about 36 lines, I really needed to get the message across. Ifioque may have sounded brutal in his concluding paragraph, but, well, what can women of a great calibre do right now?

I beg to know if the president of SWAN would review that slogan or do we start another sex/ gender war soon? What are your thoughts concerning SWAN vs/ SMAN?

A Glossary of the Nigerian Pidgin Languages Used Above:

“Aka gum tight” – the quality of being stingy.

“…Couldn’t can” – … couldn’t believe what I saw. Incomprehensible.