If you are one of my Facebook friends, you must’ve seen my update about seeing Blood Sisters on Netflix last night. I picked up my laptop after seeing the film and started writing. A piece of writing like this is one of the reasons I have never referred to myself as a writer yet.

One of the first three scenes in Blood Sisters gave me a good chill and I knew I was ready to see the film. Maurice Sam instantly reminded me of the Nigerian TV series which aired on Africa Magic Family in 2017 or thereabout. I was happy to see Dayo’s roommate in ‘Hustle’. 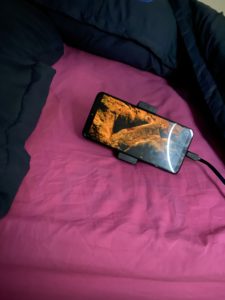 Not me laughing at how cold heartedly Uduak Ademola switched tones when Timeyin was consoling her at the dinning table. I saw the brutality in a supposed mother’s eyes then. But moving on, we get to see that Mrs Ademola only passed down the hatred she felt for her deceased husband down to the children she had for him. She only loved Kola truly because Kola was the only child born out of love. Uduak Ademola may have considered her deceased husband a weakling, and eventhough she was not happy with late Kola’s real father, it is glaring that she must have really been in love with him.

Sarah is painted to be emotionally weaker than Kemi in the film, but the balls with which Sarah danced at her enagegement bearing in mind that her husband to be is lying dead in their hotel room’s shower is underrated. As Kemi later explained to her, Sarah had to act as the cheated and humiliated bride and her best friend had to just be the caring friend and both had to live in oblivion.

Kenny’s and Blade’s situation proved how dangerous it is to be at the wrong place at the wrong time. Well, the incident with the good doctor definitely reminded me of Squid Game on Netflix.

Inspector Chicago was actually going on well his job and the comical effect with his reason for being back in Nigeria was truly comical. I love how emotions were brought to play when he decided to go look for Kemi and Sarah. Emotions are very powerful, as even the demon who had possessed her entire family finally begged (on her knees) her druga addict and useless daughter. Uduak Ademola finally remembered that she was Timiyen’s mother and begged not to be killed. I think Timiyen’s act to first of all get Uncle B out of the way before facing her family was a totally calculative move. That scene would have ended differently if the family’s personal thug was still alive.

I don’t want to forget about the hint and reminder that The Nigerian Police accept beautiful tips on happy weekends. The scene where Kola’s body was discovered and being checked was in a positive light anyway. And in fact the doings of The Nigerian Police was elevated, until I noticed that the station which was mostly used had some missing letters on their name inscription.

Uchenna’s reaction to Sarah’s plea against the wedding shows how desperate a typical Nigerian mother gets when the issue of marriage is raised concerning her grown daughter. The conversation between mother and daughter also proved how materialistic some people can be, and consequently the downside of such mindset was revealed when the Ademolas asked Sarah’s family to return all the monetary favours granted them while Sarah and Kola were still together.

Timeyin’s act with the man at the extreme rehab centre also shows the level of hypocrisy humans live in. I was expecting our holy prophet to call for deliverance upon his own head after kissing and making out with Timeyin. Our holy prophet enjoyed the act with Timeyin and was smiling sheepishly while he reminisced about that brief foreplay. How dare our holy prophet even let himself fall into temptation, isn’t he supposed to be aware that Timeyin was possessed with the spirit of drug addiction?

Kemi’s grandmother’s relationship with the girls further proved why many Nigerian children love their grannies so much. After so much hurdles and even in the midst of tribulation, Kemi and Sarah were able to have a good and genuine laughter while at grandma’s place at Okedu Town.

I consider Kola’s affirmation to let Uncle B deal with Sarah’s ex, after he stormed the hotel where the wedding was scheduled, a very comical effect. If this was twitter I would’ve said ‘it was Kola’s facial reaction for me.’ The first time Uncle B spoke in the film was when he said ‘how is it possible that the police vehicle has no fuel?’ Meanwhile Uncle B reminded me of Ade Tiger in King of Boys: The Return of The King.

I would rate Blood Sisters a 6.5/10 because it is a good drama, dramatic crime film and totally didactic and emotions arousing. But I won’t tick the thriller box beside it. As regards the quality of being suspenseful, I feel the film would have had more suspense if the plot was expanded. I think Blood Sisters can make it up to 9 or 11 episodes if we want to juice the stories of the photographer, Kemi’s ex, the good doctor or even Kola’s exes even more. Since ‘The Catch’ ended the way it ended, then I can only hope for Uduak’s death and Kola should come back to live while I see how they’d explain how possible it was. Afterall, the first born child of the family had said that Kola was abroad attending to some family businesses. I will update this post as soon as I have more thoughts about the Nollywood Netflix 2022 limited series, Blood Sisters, and when I am ready to edit this writeup.