More drama clouds the entertainment industry as a veteran Hollywood actor, Will Smith, physically assaults comedian host of the Oscars Academy Award, Chris Rock, on live stage after he seemingly made a joke of Will Smith’s wife’s, Jada Smith, bald head. 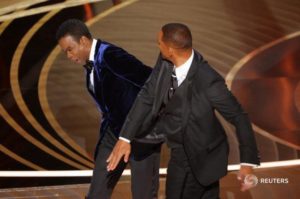 Fans have described the attack as a “white collar act of pretence and hypocrisy” when the actor shed tears while giving his award acceptance speech, which even got him a standing ovation. 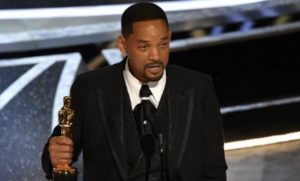 Moments later, Fans on social media slammed Mr Smith for not directly apologising to his victim during his post award speech as he did apologize to the academy. They backed their claims by pointing out that Will Smith never meant his apology as he was seen celebrating and dancing merrily during an after party hosted after the 2022 Oscars Award show as if nothing had happened earlier.

This will not be the first time Will Smith’s personality would controversially make the headlines  on social media, news and blogs as they had in recent times done so. A similar situation was when his wife, Jada Smith, was involved in an entanglement with another American superstar.

Considering Will’s past history of mistrust between him and his wife, a lot of viewers and others who are aware of the incident which occurred at the 2022 Oscars Award are wondering if it was necessary for Will Smith to go to that extent to prove any sort of love or loyalty to a wife who had allegedly disrespected him by cheating on him.

The main observation which has attracted massive reaction and discussion is that at the instance the joke was aired, Will Smith was seen laughing until he had and eye-to-eye contact with his wife who seem to have given a moody reaction to the joke. This prompted  Will to commit this unspeakable act which is viral on the media, currently.

So much for Will Smith’s fans as this act has made him to be tagged on social media as “a fallen hero”. Could the reputation he built for decades be washed down the drain in one night?

Shortly after the incident, Will Smith went on to apologize to the academy via a social media post on his Instagram handle. He further resigned from the Academy. In response, the Academy replied that they accepted his resignation but added that they may be some extra disciplinary actions awaiting the Hollywood movie star.

It might interest you to know that Will Smith currently has some unreleased movies such as Bad boys 4, Bright 2 as well as Apples; emancipation where he plays the role of a runaway slave.
Will this whole drama from the 2022 Oscars Award Show affect the performance of his movies as well as his career? Stay tuned as we unravel more of what become of your bad boy actor, Will Smith.