Skip to content
Liverpool who have been plagued with injuries this season played two midfielders in centre back – Fabinho and Jordan Henderson, but the duo, alongside goalkeeper Alisson who put up a MOTM display, formed a good shield as the game ended in a stalemate.
Apart from a fierce Paul Pogba’s shot which Alisson Becker kept out comfortably, the Red Devils offered very little in attack, with Marcus Rashford being flagged for offside five times.
In the end, the game failed to live up to the pre-match hype and high-pitched anticipation, but it is United who will leave the happier of the duo as they extend their lead at the top of the table to two points, while Liverpool who have dropped from second to third following Leicester’s win, could further drop to fourth if Man City defeats Crystal Palace later tonight.
Manchester United visit Fulham in the Premier League on Wednesday, while Liverpool host Burnley a day after.
Next Sunday, the hosting rights will be reversed as Liverpool visit Manchester at Old Trafford in the FA Cup fourth round. 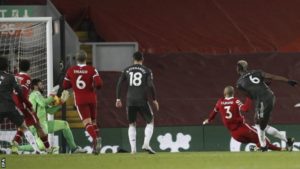