New Year Gift To Chelsea Fans Wasn’t So Pleasant After all. 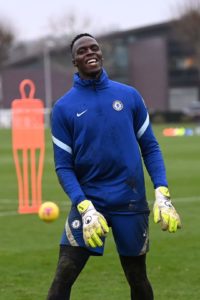 There were lots of expectations on Frank Lampard’s Blues as they took on Pep Guardiola’s Sky Blue in the Premier League tonight, especially considering Chelsea’s abysmal run of form lately, and the least their fans expected was a statement as they took on Manchester City.

But that was not to be as Chelsea were already trailing by two goals with barely 20 minutes played, following quick-fire goals from Ilkay Gundogan and Phil Foden in the 18th and 21st minutes respectively. 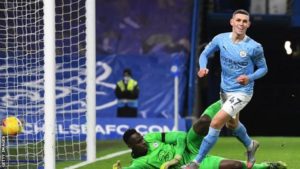 It is even more disappointing as City were without a number of key first-team players including Kyle Walker, Gabriel Jesus, Ederson and Ferran Torres, due to an outbreak of coronavirus at the club which saw their previous game with Everton suspended.

The Blues who were yet to recover from the early, unexpected sting made a weak effort at rallying, but it was the Citizens who raced into a 3-nil first-half lead as Kevin De Bruyne who had provided Foden’s goal, deservingly got on the scoresheet with a tap-in after Raheem Sterling’s curling effort had come off the post.

After the introduction of Billy Gilmour, Kai Havertz and Callum Hudson-Odoi in the second half, Chelsea played with more sense of purpose and ambition and after several thwarted efforts at finding the net, Hudson-Odoi finally got a consolation goal in the last minute of injury time following a cross from fellow substitute Havertz.

The goal prevented Zack Steffen who was standing in goal for the absent Ederson to keep a clean sheet on his Premier League debut, although he was rarely tested all game.

As a result, City go up to fifth in the table, while Chelsea drop to eight, having played two games more than City.